“Start by doing what’s necessary; then do what’s possible; and suddenly you are doing the impossible.”
~ Francis of Assisi Read

Borderland: territory at or near a border, fringe, a vague or intermediate state or region.

Words too true when it comes to the area of space between Primary Federation worlds and the Klingon border has been known as the Borderlands. Whilst the area is dotted with Federation worlds, it is the other worlds which make the majority of the area that define its status. Neutrality or non aligned to any party. The price of individuality and non conformity lead to an area considered almost primitive in Federation eyes. Worlds driven to famine via drugs and crime…worlds ruled from above by decadent Orion Syndicate overlords…neutral systems with corrupt governments and self governed military’s…and of course the frontier worlds…

In the past two-hundred years Starfleet has had trouble creating order within the region, much less a sense of peace. With the recent changes in the command echelons, those in overall charge of the region started looking outside the box as they saw the rising need to attempt yet again to bring a semblance of order and stability to the Borderlands and another pair of eyes to the Klingon and Romulan borders.

The Ashland Initiative was formed as a sign of Federation outreach. Until recently the Ashland System had been a fully independent system of mixed species. With both dueterium and dilithium mining facilities, the M-Class planet of Ashland Prime has been the victims of random raiding parties for over a hundred years on and off.

In 2385, however, the system was attacked by raiders with heavy weaponry and the damage upon the colony was far greater than usual in both infrastructure and lives lost. This prompted a request for official assistance from Starfleet.

By 2388 Starfleet had built a Starbase (SB 471 ‘Kusawake’) in orbit as command saw the opportunity to create a greater foothold within the Borderland in a system which had resources the Federation was in dire need of. The strategic position of the Ashland system with growing Klingon concerns and the recent destabilization of the Romulan Empire with the Hobus incident was also a boon for the Federation.

With a Starbase there was special consideration for a grown active presence in the Borderland as a whole and hence the USS Southern Cross and USS Venture were assigned to the area on a permanent basis with the aging USS Venture assigned to the Station as a support craft and the USS Southern Cross as the active patrol and response vessel in the region.

In a region bordered by several unpredictable major empires and dozens of independent species as well as the criminal cartel known as the Orion Syndicate there will be many challenges faced, but the goal to tame the Borderland will be sought by those who lead the Ashland Initiative.

Equally the Commanding Officer is happy to deal with any and all inquiries. 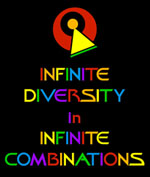